History of the Oriental Bands

The Oriental Band unit is the second oldest unit in Shrinedom. It is the most colorful by a wide margin. It ties the shrine to its Middle East background with its enchanting music and its flowing costumes. The following history is: Copied from Parade To Glory (The story of the Shrine) by Fred Van Deventer, Pub. William Morrow &amp; Co.., 425 Fourth Street, N.Y. City. 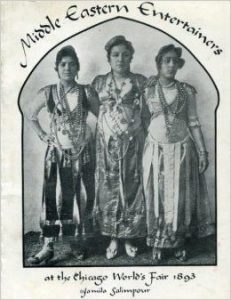 “During Chicago’s great World’s Fair in 1893 to celebrate the city’s recovery from the disastrous fire caused by Mrs. O’Leary’s cow, there were a number of Turkish exhibits and shows, including the beautiful and justly famed Oriental dancers. To ballyhoo, the shows, including the one which starred “Little Egypt”, there appeared on the outdoor platforms the spieler and two performers, one playing a reed horn the other a tomtom. Whether it was the horn or tomtom or the dancers that lingered in the memory of the Medinah Nobles is not recorded, but in 1899 the redoubtable Frank Roundy Potentate of Medinah and organizer of the first Arab patrol in the Shrine suggested that Medinah needed a band. He commissioned George J. Kurzenknabe the temple organist to form the band, and its initial membership was composed of the organist and the four members of the temple quarter.

No such instruments as were used at the World’s Fair could be found in Chicago, and a German instrument maker was commissioned to design one. But when it was finally completed, it cost twenty dollars. Medinah’s treasury in those days could not afford twenty dollars for one horn and besides, it did not sound right. The inquiry continued; however, and in 1900 Kurzenknabe found a similar horn, which sounded just right, in the establishment of Sing Fat and Company in San Francisco. Best of all the horn sold for one dollar.

With the arrival of the horns, and tomtoms, a silver triangle, and a Chinese gong, the band began rehearsals. There was just one tune, which for the want of a better name was called “The Midway”. Thousands of Shriners will remember the words that were sung to it.

“Mind what your mama says, and mind what your papa says. And don’t go near the Hootchie Kootchie dance.” The band made its first appearance at the April ceremonial of Medinah in 1900. By the time the September ceremonial was held, there were several more members of the band, but still, just one tune and the Nobility “grew” a bit tired of it, no matter how sensuous it might be. Word reached the band that unless new tunes were to be found, ripe tomatoes, seltzer bottles, and whatnots would be brought into play. Kurzenknabe hastily dashed off some music that would fit the strange reed instruments and saved the day.

The Medinah Oriental Band made it first parade appearance at the 1901 session of the Imperial Council, but the rough cobbled streets of Kansas City made it difficult to play and the Medinah patrol, which had been marching to the strange cadences, complained. And rightly so. But two more years improved the technique, and when the orientalists marched at Saratoga Springs they were such a success they went high hat and looked down on ordinary brass bands. The fact that they played “The Midway” at Saratoga caused many watchers to transform into muscle dancers and pseudo-contortionist. Since then the Oriental band has become a standard uniformed unit of almost every temple.” This ends the history as written in the previously mentioned Parade To Glory.

The Association Shrine Oriental Bands of North American was formed 26 years later and its first President 1928 – 1929 was Dr. George H. Madill from where else but Medinah Center. The A.S.O.B. wishes to thank Noble Dale Klauss PP, Zagazig Center for sharing the Oriental Band history.