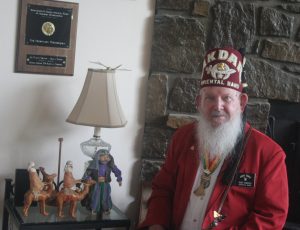 That is me in the picture located nearby, the new Second Vice President of ASOB International.  Being brought to you by the modern miracles and mysteries of the internet, the new way of doing almost everything.  Hopefully, it will be in person sometime during the ensuing year.

My story started on June 14, 1944, in Lake Charles, LA.  During the next 23 years, I lived in just about every state West of the Mississippi and a few on the Eastside.  Texas and later Oklahoma was considered home base.  In 1967 I mover with wife and daughter to Sand Springs, Oklahoma and this has been home base ever since.  I finished my formal education while living in Sand Springs, OK (near Tulsa) where I received a Bachelor of Science Degree in Mechanical Engineering from the University of Tulsa.

Sand Springs is where I was raised a Master Mason in 1986 and joined the Tulsa Scottish Rite, Akdar Shrine, and the Akdar Shrine Oriental Band shortly thereafter. Through the years I have served as the secretary, treasurer, president, music director, and other positions in the band and have played most of the instruments.

In 2015 I was nominated and elected as the 4th Vice President of CSASOB and just recently became a past President of that organization. Through the years as a member of Akdar Shrine Oriental Band, we won many awards at the Central States meetings including first place in all categories at various times and myself as “Best Director, Small Bands” in 2003.

At the 2019 ASOB Jamboree in Nashville, TN, my second ever Jamboree, myself, and the main drummer for Akdar Shrine Oriental Band managed to win First Place in the Small Band category. Later in the year at the CSSA meeting in Sioux City, Iowa, Akdar joined forces with the India Shrine Oriental Band (Oklahoma City) and we managed to take home First Place in all three categories plus Best Director for medium size bands.

In the coming years, I will be working hard to meet the obligations that go with the position of 2nd Vice President and other positions in the Association of Shrine Oriental Bands.

AS you know our main duty and obligation is to help the Children.  This is primarily through the Ladder of Smiles.  The Ladder of Smiles is our, ASOB, charitable arm that contributes to the support of the main Shrine Hospitals for Children.  Our current ASOB President has set a goal of $50,000 for this year and we will need everyone’s help obtaining this goal.

If anyone out there has any questions or needs any help with/for their Band, please contact me or any of the other ASOB Officers.  We are here to help you and our organization.